SignUp Now!
You are using an out of date browser. It may not display this or other websites correctly.
You should upgrade or use an alternative browser.

Bridgette is sexy as a blonde and as a brunette 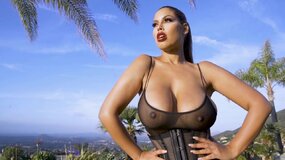 Hair color has a big impact on how someone feels, and it's almost unbelievable how many women have confirmed that they feel different as blondes. She changes her hair color from time to time, but she feels the most powerful as blonde. She had a boob job in 2009 and since then she is more popular than ever.

One in twenty brunettes remarked that she was not taken seriously as a blonde. On the other side, brunettes have more intelligence and taste. A study involving more than three thousand women found that women starts to experiment with hair color around the age of 21. Most women stated that they dye their hair because their natural color is neither blonde or dark. More than half of women think that men fantasize more about blondes, but as many as 80 percent of women think that brunettes are more faithful wives. The same number believes that brunettes are better friends and that it is easier to have better career. Bridgette B is also a brunette in some of her movies, what do you think, is she hotter as a blonde or as a brunette?

Rookie · 31
You must log in or register to reply here.